“The field of camp was, indeed, a lifetime endeavor for Morry. He was a compassionate leader; a man of vision and commitment; a beloved advocate of summer camp as a valuable growth experience for children.”

Project Morry was founded in 1995, inspired by the vision of camping world hero, Morry Stein. Morry recognized the significant positive long-term impact camping had on the lives of the young people who attended his camp, Echo Lake, and believed this experience should be shared with children from all socioeconomic groups.

His goal was to give all American children, regardless of economic status, the invaluable gift of summer camp and a consistent year-round program. Morry was working on achieving this goal when his life was taken in a plane crash in 1994.

Determined to make Morry’s dream a reality, his friends, colleagues, family and campers created Morry’s Camp the following year. Every year since, the program has grown in scope and impact into the Project Morry you see today. From its beginnings as a summer camp, Project Morry is now a robust ten-year program that supports the academic and life success of hundreds of young people year-round.

The incredible partnerships with our community, donors and young people has allowed our programs to flourish and enabled new programs to take shape as we carry out our mission together.

Project Morry was founded in 1995 inspired by Morry Stein, a camping world hero.

All children should be given the opportunity of a summer camp.

1995
Morry’s Camp was established by the friends, family and colleagues of the late camping world hero Morry Stein.

1998
The Stanley M. Isaacs Neighborhood Center in Manhattan became a new community partner. Morry’s Camp was selected to participate in the New York City Board of Education’s Breakaways initiative based on year-round learning through educational programs in camps.

1999
This summer was the first of a long-term lease of a new campsite in Glen Spey, NY. The first class of Morry’s campers graduated from the four-year program, which focused on life skills and long-term education and career goals.

2002
A mentoring program was created for high school juniors and seniors. Volunteer coaches made a two-year commitment to help young people achieve their goals after high school graduation. Additionally, the Post-Grad Program expanded to five years.

2005
More than 300 inner-city children were now benefitting from our year-round educational and recreational programs, and Morry’s Camp received the Eleanor P. Eells Award from Programming Excellence – the highest form of recognition from the American Camping Association.

2007
Morry’s Camp was renamed Project Morry to better reflect the year-round youth development and educational programming. The camp received the ‘Excellence in Summer Learning Award’ from Johns Hopkins University in recognition of commitment to high-quality summer learning opportunities for all young people.

2008
Project Morry continued to expand its reach, as the Carver Center in Port Chester, NY became a community partner.

2009
Project Morry celebrated its 15th season and our intentional focus on educational enhancement gained national recognition by being included in the American Youth Policy Forum’s March 2009 publication entitled Learning Around the Clock: Benefits of Expanded Learning Opportunities for Older Youth.

2010
Project Morry was now serving more than 400 young people each year, and our 140 alumni remained involved by returning to visit us, work for us, participate as volunteers, serve as role models and share their perspectives.

2013-2015
These were break-though years for Project Morry’s fundraising efforts, which help us provide more services to increasing numbers of youth. We worked to garner support from the business/corporate community, foundations, and other sources; hosted our most successful annual gala and once again achieved 100% giving from our Board of Directors. 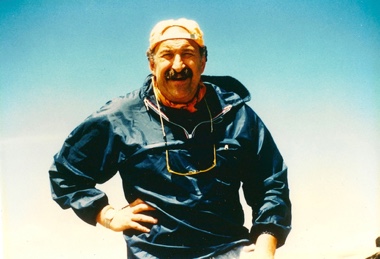 “Morry's smile alone made others smile, too.”

Morry was born in 1936 in the small town of Bloomsburg, Pennsylvania. He was the younger of two sons and a natural born athlete, excelling particularly in football and baseball. He played minor league baseball and was drafted by the Pittsburgh Pirates, however he chose to attend Brandeis University, one of the 68 colleges that offered him a full scholarship to play football.

A 1958 graduate of Brandeis University, Morry was inducted into the university's Athletic Hall of Fame. He also received an M.B.A. from University of Chicago and went on to work in marketing and management consulting. And then, Morry found his calling.

For 30 years, Morry and his wife, Amy, operated Camp Echo Lake in Warrensburg, New York, one of America’s premier children’s summer camps. He was 28 years old when they bought the camp from Amy’s parents, who founded it in 1946.

Morry recognized the long-term impact that camping had on the lives of the upper middle class children attending Camp Echo Lake. He very much wanted this experience to be shared with children from all socioeconomic groups. In 1970, Morry founded the Echo Lake Idea, a week-long scholarship camping program for children who could not otherwise afford camp.

For Morry, this scholarship program was just the beginning. Morry believed that every child should have the opportunity to enjoy a fun-filled time away from home in a beautiful and safe environment. He also believed in the power of a positive and consistent year-round presence in a child’s life. Morry was the Chairperson of the American Camping Foundation, an organization that raised over $1 million to send children from under-resourced communities to summer camp. On October 28, 1994, he traveled to Martinsville, Indiana to head the Foundation’s Annual Board Meeting. The meeting was charged with excitement as the organization was nearing its fundraising goal, and the gift that Morry felt was so needed was about to be given.

Sadly, Morry’s life was taken on his return flight home, in the crash of American Eagle Flight 4184 near Roselawn, Indiana.